skip to main | skip to sidebar

Member of Lancaster girls track team dies at 16
Wednesday, February 4, 2009
By RANDY JENNINGS / The Dallas Morning News
rjennings@dallasnews.com
LANCASTER – Members of the Lancaster girls track and field team spent Tuesday trying to cope with the death of a sophomore teammate.
Sharla Butler,
16, died late Monday afternoon, a little more than a
month after suffering seizures that were caused by a form of encephalitis.
Sharla Butler was a sophomore at Lancaster.
"I don't think it really has hit us that Sharla won't be back running with us," said Jerneshia Mergerson, a junior sprinter. "This whole thing feels like it never really happened. Everybody just wants to go home."
Butler, a sophomore, was the youngest of Sonia and Raymond Butler's four children.

Two older sisters, Sha'Ray and Shira, also ran for Lancaster and attend Kansas and Jacksonville State (Ala.), respectively, on track scholarships.
Lancaster coach Beverly Humphrey said Sharla could have been the best in the Butler family and one of the best to compete for Lancaster.
As a 4-foot, 8-inch freshman, Butler advanced to the Class 4A Region II meet in the 400 meters.
"I had big plans for her," said Humphrey, who has coached Lancaster to eight straight state championships. "Her goal was to someday compete in the Olympic Trials, and I believe she could have done it."
Members of the Lancaster team prayed together after Tuesday's practice.
When Butler began feeling sick in late December, she thought she had the flu. She was taken to a doctor after seizures on Christmas Eve.
Family members thought she was improving after treatment, but Sha'Ray Butler said her sister had an eight-minute seizure on New Year's Eve. She was rushed to a hospital, but her condition deteriorated over the next few days. She eventually lost consciousness.
Humphrey, a constant visitor during Butler's hospital stay, has ordered a banner for the locker room with a picture of Sharla and an inspirational message: If it takes work, we'll get it done. If it takes heart, we'll all be as one.
Teammates insist Butler will be on their minds.
"Everything we do this season is going to Sharla's memory," said senior Leah Norman, a senior hurdler. "We want to make her proud."
A wake is scheduled for 8 p.m. Friday at Ideal Pentecostal Church in Dallas.
Lancaster's boys and girls track teams plan to be together for Butler's funeral at 10 a.m. Saturday at the Lancaster Junior High auditorium.
"If I could," said Humphrey, with tears welling in her eyes, "I'd give back every championship that we've won if we could have Sharla back for one day."
Posted by JUMP TEXAS at 12:33 PM No comments: 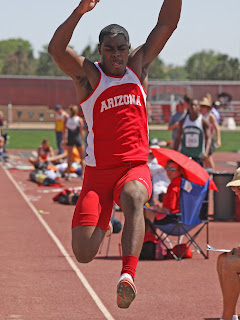 BY DON WILLIAMS
AVALANCHE-JOURNAL
More than half the Pac 10 Conference and a few schools in the Big 12 wanted Bryce Lamb to play for their football teams. For the time being, Lamb appears content to forego the adulation of big crowds.
The Chandler, Ariz., high school standout said Sunday that he plans to sign with Texas Tech when the national signing period begins on Feb. 4. It’s a track and field scholarship that he’s going to sign.
Lamb said he hasn’t closed the door on the possibility of playing football. But in track, he should be talented enough to contend for trips to NCAA national meets his first year on campus, so that’s where his focus is going to be.
“I do like to play football, but if the track season goes good enough, I don’t think there would be too much more thought about it,” Lamb said.
In competition, Lamb has career bests of 52 feet, 2 inches in the triple jump and 25-9 1/4 in the long jump. During the 2008 high school season, his junior year, Lamb had two of the top six triple-jump marks in the nation and long-jump marks that ranked third and 15th nationally.

He also played running back and safety for his high school football team and said he has football offers from Arizona, Arizona State, Cal, UCLA, Colorado, Colorado State, Nebraska, Washington State, Oregon State, Air Force, Texas-El Paso and Minnesota. Lamb, who is 6-foot-1 and 185 pounds, said most of those schools recruited him to be a defensive back.
Asked whether he preferred one sport over the other, Lamb said, “I don’t think I enjoy one more than the other. I just think I work harder for track than football maybe.”
By NCAA rule, an athlete on track scholarship can’t play football his first two years on campus. To do so any sooner, he’d have to give up the track scholarship.
To put Lamb’s personal records into perspective, a 25-9 1/4 long jump would have been second at last year’s NCAA Midwest Regional outdoor meet and would have tied for first at the 2007 Midwest Regional. A 52-2 in the triple jump would have been sixth at last year’s Midwest Regional.
Tech’s Anthony Flemons, who was an NCAA outdoor qualifier in the triple jump in 2007, went a career-best 52-9 1/4 to win the prestigious Drake Relays two years ago and finished third in last May’s Big 12 outdoor long jump with a career-best 25-3 1/4 — shorter than Lamb’s personal best.
Lamb hasn’t been recruited by Tech football coaches. However, he said he had the blessing of Tech’s track staff to try football in the future if he wanted.
“When they told me that, that kind of reasoned it all up for me,” he said. “It’s a good place to play football, and that’s where I wanted to go run track.”
Lamb is a cousin of Terra Evans, a freshman sprinter from Phoenix on the Tech women’s track team.
Posted by JUMP TEXAS at 12:34 AM No comments: 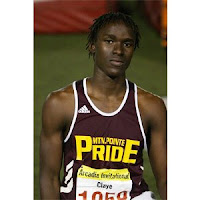 A few days later, the Mountain Pointe senior made a quantum leap.

When his Pride teammates will be competing in high school events this spring Claye will be jumping as a collegiate freshman for the University of Oklahoma.

"I've been planning on this since the end of the last school year," Claye said. "I realized when I was a freshman that I had to have the grades and I got used to studying. I was ahead in my classes and I had all my credits, so I figured I might as well do it."

Claye's last day at Mountain Pointe was Dec. 18 and he will be leaving a couple of weeks later for Norman, Okla.

He also won the prestigious Arcadia (California) triple jump event last spring and was the even'ts state champion as a freshman in 2005. Claye was second in the triple jump to his longtime friend and rival, Chandler High School's Bryce Lamb, in 2006 and won the United States Track and Field Junior Olympics championship a year earlier.

Although it is rare for a high school senior to finish early to enter college and compete in athletics, it happens more often in track and field, explained Jeremy Fisher, an Oklahoma assistant coach who recruited Claye.

"The great thing about track is that it isn't age discriminatory because 53 feet is 53 feet no matter if you're 15 or 25 years old," Fisher said. "It can be different in something like football where you come in and a sport isn't in season. You can get lost in the shuffle."

Claye isn't likely to get lost in the shuffle.

Most freshmen have a few weeks to get acclimated and adjust, but the Sooners open the indoor season on Jan. 9, seven days after Claye arrives in Norman.

"Will and I have a great relationship already and I want to make the transition as easy as possible for him in training and competing," Fisher said.

Claye and Fisher were slowly drawn toward each other over the past years after Claye started exploring what programs had the best jumpers.

"I looked up the stats and (Oklahoma) had some of the best jumpers in the country," Claye explained. "I started talking to the coaches there and they had been interested in me before so I decided to go there."

It was as easy a choice for the Sooners.

"Will was the No. 1 returning jumper in the country," Fisher explained. "His marks were very respectable and with very little increase in bulk he'll be a national qualifier with All-American status."

Claye and Lamb have been friends since middle school and have challenged each other to excel.

"Will and Bryce were good enough to push each other to get better," Fisher said. "It's a great opportunity for Will at Oklahoma, but it will be interesting to see how Bryce does now."

There won't be any bench time for Claye at Oklahoma.

"He'll come in and be successful even at the level he is now," Fisher said, "Obviously he's going to get better. He's only 17 and has a minimal lifting background so he's just developing. By the time he's a senior and 21 or 22 years old it's going to be a huge difference."

But Claye doesn't intend to wait that long to make his mark.

"I want to win the championship next spring and go the Olympics in 2012," Claye said.

It's not a pipe dream for the Pride jumper who enjoys mathematics and plans to get a degree in computer engineering.

"You'll see Will competing in the Olympics in 2012 and 2016," Fisher said. "I've told him that even though Oklahoma is a four-year academic and collegiate commitment he has an eight- or nine-year athletic commitment."
Posted by JUMP TEXAS at 8:22 PM No comments: 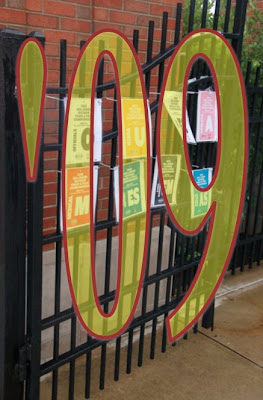 HAPPY NEW YEAR: '08 is gone. '09 is here, and with the new year comes a talented corps of known and unknown jumpers. Stay tuned for the top returnees from Texas and throughout the United States?
Posted by JUMP TEXAS at 3:08 PM No comments: 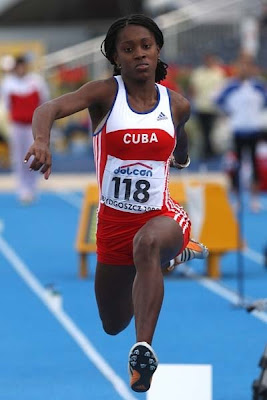 DAILENYS ALCANTARA
BYDGOSZCZ, POLAND — She's only a "youngin," but can outjump most boys a year or two her senior. Youth prevailed in Poland on Day 3 of the World Junior Championships as 16-year-old Cuban triple jumper Dailenys Alcantara (DAH-ee-LAY-nees AHL-kahn-TAH-rah) uncorked an effort of 14.25 meters (46-feet-9), literally distancing herself from an international field of 12 of the best horizontalist on the planet.
Last year, as a 15-year-old, Alcantara won the World Youth Championships (17-and-under) in the Czech Republic, where she jumped 13.63 meters (44-feeet8.75).
Posted by JUMP TEXAS at 3:40 PM No comments: 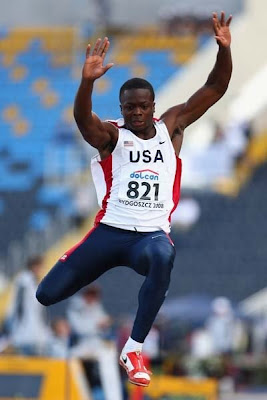 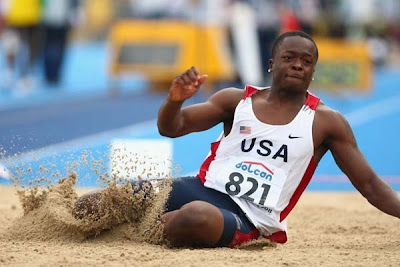 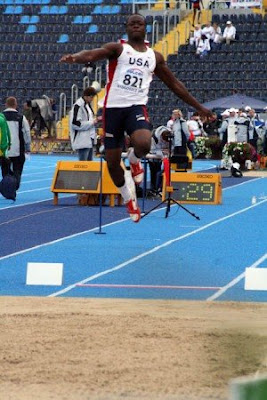 Track and Field Videos on Flotrack